I have researched this question for four years now, written a manuscript, and submitted it to four journals, all of which elected to not publish the research. Two editors said it did not fit their journal, one journal never responded, and the reviewers of another journal said that I focused too much on the significance of the term ‘advance’ used in the University of Deseret’s founding document.

The institution does not neatly fit in any category–religious, secular, research, etc. It was a practical school before America had practical schools. It reflected the religious community that started it, but the religious community was unique in that it attempted to build a free and independent state in an arid land. Because the University of Utah’s founding can not easily be categorized, I’ve created a scholarly sketch to help tell the story. It includes links to primary and secondary sources with only a brief narrative. I’m hoping the sketch will allow readers to come to their own conclusion about the origin of the institution. 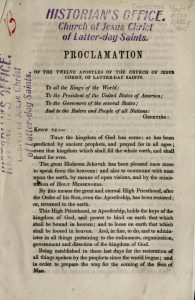 Proclamation of the Twelve Apostles of the Church of Jesus Christ, of Latter-day Saints 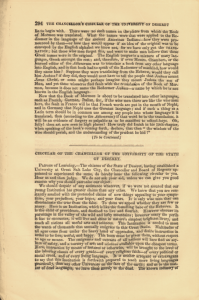 The Chancellor’s Circular of the University of Deseret

These governing ambitions get described in various ways. The Proclamation above describes the society as following “one standard” and “one religion” but for a brief moment focuses on the freedom any citizen (of the faith or not) can enjoy (see pg. 12). If you look at the Chancellor’s Circular above, the society is described as open and encouraging of multiple faiths with the university acting as a gathering point for people to learn and study together.

Researchers have focused on the ideal society embodied in the concept of the Kingdom of God:

And some have called it a liberal theocracy:

Researchers have labeled the governing ambitions with various terms:


In my opinion, it was the governing ambition (no matter how it gets labeled) along with attempting to settle an arid land that influenced the type of university Latter-day Saints wanted to establish: a secular, research university. I like to think of it as a practical school for lofty purposes. 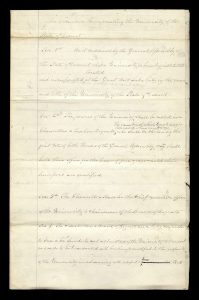 An Ordinance Incorporating the University of the State of Deseret, February 28, 1850 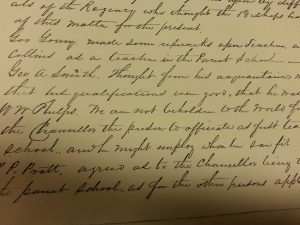 Gov. Young’s comment on teachers from University of Utah Board of Regents Meeting Minutes, 1850-1969

The first professor Cyrus Collins was not a Latter-day Saint and he chose what he taught, but he did not stay long.

It could be that many of the Latter-day Saints did not like having an outsider in their society and succumbed to, what a colleague has described, siege mentality in response to the presidential charges of rebellion and treason leading up to the Utah War (see pg. 170 of White’s paper above). Other primary sources have said that the governing aspirations written on paper did not match what happened on a daily basis:

If this scholarly sketch has piqued your interest and you would like to read the fuller history, please get in touch with me and I’ll share my manuscript with you. You can reach me by email [allyson.mower at utah.edu] or Twitter @allysonmower

Bibliography of U of U Research